To ensure that the production does not lack in quality the board is employing a team of creatives. These creatives will each work on their own division, staging and advising the students according to the concept. For the upcoming performance the board chose: Melanie has been  a dance teacher since 2002and choreographer for different age  groups and levels. From her early age she was already on the stage, in dance shows and musical productions a lot. The theater is like her home.

In her own dance school she teaches toddlers with their first steps on the dance floor and helps them to push to their limits. She does the teaching not only for the little ones but also for adult dancers who she supports with a lot of passion and personal involvement. Her strength is that she can make one strong group of different individuals in which everyone feels at home.

Melanie: “For me, dancing is an outlet and I can be completely free. It is nice when my students experience the same. Whether it is with a simple routine or a spicy choreography, the feeling of pride and respect remains the same. ” Peter Bogaert, originally from Antwerp – Belgium, spent his formative years in Amsterdam, Basel and Berlin and has built up an impressive array of activities as a violinist, composer and conductor. Equally at home in early music repertoire, the classical-romantic canon and new music, he divides his time as associate concertmaster of the Netherlands Symphony Orchestra, director of its chamber
orchestra and baroque academy, guest concertmaster with various orchestras like the Royal Flanders Philharmonic, the National Orchestra of Belgium and the Chamber Orchestra of Belgium, and as a soloist in baroque and contemporary music.
The last few years he is more and more venturing into conducting, for which he receives decisive coaching by Jac van Steen and Antony Hermus. He has conducted projects for Dutch Touring Opera a.o. Starting 2015 he is the conductor of the Twente University Orchestra.

’The atmosphere and thrill of everyone involved, from the early planning days till the feverish final stages is utterly unique and unforgettable. To form a spectacle where each individual exceeds his or her own expectations and grows beyond any level(s) he would have possibly thought to be able to attain, is an experience nobody forgets for a lifetime… Robert is an actor/director who directs the international group of Theatre Association NEST at the University of Twente. He loves the way the combination of theatre, song and dance can contribute to convey emotions to the audience. Robert also sings in the performance duo ‘Robert & Pepijn’ and gives workshops in acting and presenting.

The way he directs is to help actors get to know their character(s) and the situation they came from. This way, actors don’t just move and talk ‘just because their director told them too’, but because actors are really aware about their feelings and impulses.

Robert: “There is some kind of pride when you can break someone’s barriers on stage, or you see actors following their feeling on stage. I also get to work with lovely groups of people who share your passion for  theatre and music.” 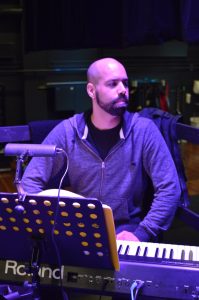 Tasco Silva started his musical career as a pianist.

Already during his studies at the conservatory of Enschede he worked a lot with singers. He liked it so much, he decided to choose song accompaniment (liedbegeleiding) as his masters subject.

Over the years he contributed to projects in different musical genres, such as classical music, opera, musical theatre and musical.

In his daily life, Tasco is working as a piano and keyboard teacher in Germany and The Netherlands, furthermore he accompanies different choirs, such as vocal ensemble The Petra Singers and musical theatre group Music All, and he conducts and accompanies vocal groups Classic and More and Happy Few.